A Very Short Introduction to the Subject

There is a fable that goes like this. Long ago, in Eastern India, a man named Sissa invented the game now called chess. He showed it to his ruler, who was delighted and offered Sissa a reward for his invention. "Oh emperor, my wishes are simple," Sissa spoke. "I only wish for this. Give me one grain of rice for the first square of the chessboard, two grains for the next square, four for the next, eight for the next and so on for all 64 squares, with each square having double the number of grains as the square before." The emperor agreed, surprised that the man had asked for so little. But the emperor soon realized his folly, for the sum of rice quickly grew to enormous size. While Sissa was awarded only 512 grains for the 10th square, he was to receive more than 536,000,000 grains for the 30th square, and an astounding 9,223,372,036,854,775,808 grains for the final square. Such a pile of rice would tower above Mount Everest. The emperor, deeply embarrassed, was unable to honor the agreement. What became of Sissa? I don't know. But here we see the dynamics of exponential growth.

The development of science has followed an exponential trajectory, and it continues to play out in front of us. For most of human history, science, as a human activity, simply did not exist.

The scientific method, as memorized by schoolchildren around the world, feeling rather obvious, was absent from human thinking for most of our history as a species. Even examining the world in a critical, "scientific" way was inconceivable to most of humanity. Let us briefly trace the emergence of science, so as to appreciate how radical of an idea it is.

While Homo sapiens are thought to have evolved around half-a-million years ago in Africa, human history took off only about 50,000 years ago, and the first acts of plant and animal domestication did not occur to around 10,000 years ago (and many thousands of years later in the Americas). Writing was invented independently by the Sumerians of Mesopotamia and Mexican Indians in, respectively, around 3,000 BC and 600 BC. (It may have been invented independently by the Egyptians and Chinese, as well, although evidence is not clear.) The wheel was invented around 3,400 BC near the Black Sea. Around 2,000 BC, western Europe entered the Bronze Age, although it had already begun in the Middle East about a thousand years earlier. Bronze was a useful metal and a preferable material than stone for many purposes, such as cutting. Iron tools and weapons, stronger than those made of bronze, were to follow. All of these developments occurred over enormous stretches of time, such that life differed little from one generation to the next.

And then Greece happened. (I shall hereafter focus only on Western society.)

Greece began to emerge from the its own Dark Ages, following the collapse of the Mycenaean civilization, around the 8th century BC. Some time around the 6th century BC, philosophy emerged, so suddenly that it has become known as "the Greek miracle". The first of the great philosophers was Socrates, born around 470 BC in Athens, a rich and vibrant city-state of some 240,000 people, many of them slaves. Socrates sought knowledge by a method of question and answer, yet he insisted that it was not his mission to pass on knowledge but to force others to examine their own opinions and beliefs and discard those that could not be justified by reason. His primary interest was ethics. Plato was a pupil of Socrates that went on to found the first European university, the Academy. Plato's interests were more broad than Socrates; he was interested in not only ethics but politics, as well as abstract notions of ideal love, ideal beauty, and the "idea" of something, rather than the thing itself. In 367 BC, a young man by the name of Aristotle entered Plato's Academy. Aristotle was exceptionally bright, and later in life he opened his own school, the Lyceum. The world would never be the same, for Aristotle's wide-ranging teachings came to dominate the intellectual landscape of Western Europe for more than a thousand years.

How did Aristotle and the ancient Greeks view the world? They "were convinced that a 'logical' order was at work behind the apparent chaos of things and that human reason was able to discern the divine character of the universe." They believed the world was ordered and harmonious. The structure of the world was akin to a giant animal, "of which each element - each organ - is conceived and adapted to the harmonious functioning of the whole."  This cosmic order, the totality of the universe, was divine. God was not apart from or external to the universe, existing prior to and responsible for its creation. Rather, all was God. And the natural order was good. Thus, "one of the ultimate aims of a human life [was] to find its rightful place within the cosmic order," to live in harmony with the natural world. (Quotations from Luc Ferry, A Brief History of Thought)

This worldview shifted with the rise and spread of Christianity, accelerated by its adoption by the Emperor of the Roman Empire, Constantine I, in the 4th century. No longer "all was God", but the divine now took the form of a supernatural being, ultimately manifested in the form of a man, Jesus Christ. "Truth" was no longer to be found in the exercise of human reason. Faith became important. Salvation was personalized.

The ground began to shift again in the sixteenth and seventeenth centuries, roughly 1000 years following the decline of the Roman Empire, and at the end of a great stretch of time also called the Dark Ages, during which intellectual life was all but extinguished across Europe. This shift, referred to as the Renaissance, was built at least partly on the development of science and a new willingness to question authority. Astronomical observations made it increasingly difficult to maintain that the Earth held place at the center of the universe, a view deemed essential to many early Christians. (The publication of Nicolaus Copernicus's heliocentric theory in 1543 is often viewed as the beginning of what was to be called the scientific revolution.) With the publication of René Descartes' Principles of Philosophy in1644 and Isaac Newton's Principia in 1687, the world began to be viewed as a great machine, governed by mathematical laws.

In the words of modern French philosopher Luc Ferry, "Modern physics annihilated the foundations of the ancient world-picture -- through its assertion, for example, that the world is not round, enclosed, hierarchical and divinely ordered, but rather is an infinite chaos devoid of sense; a field of forces and objects jostling for place without harmony..." (A Brief History of Thought, 94)

And from recent French philosopher Alexandre Koyré, "the disappearance, from philosophically and scientifically valid concepts, of the conception of the world as a finite, closed, and hierarchically ordered whole ... and its replacement by an indefinite and even infinite universe which is bound together by the identity of its fundamental components and laws, and in which all these components are placed on the same level of being ... The immediate effect of the Copernican revolution was to spread skepticism and bewilderment..." (From the Closed World to the Infinite Universe, 11, 47)

The creation of a scientific worldview was unsettling but exciting. It suddenly seemed possible that man may be capable of  truly understanding the workings of the universe, including himself. "The new task of contemporary science was no longer to frame itself as the passive contemplation of a beauty inscribed beforehand in nature; it was to do a job of work, namely the active construction of laws which would endow a disenchanted universe with meaning. Science was no longer a passive spectacle; it was an activity of the mind." (Luc Ferry, A Brief History of Thought, 99)

The scientific revolution made possible the industrial revolutions of the 18th and 19th centuries, which profoundly affected the development of societies around the world and generally led to an increase in standard of living. It has sense led to the digital revolution, which is still transforming our society today. It is one of our greatest achievements as a species. We should be proud!

I should like to conclude this short history of science by framing its pursuit today. In doing so, we shall return to chess.

"We can imagine that this complicated array of moving things which constitutes ‘the world’ is something like a great chess game being played by the gods, and we are observers of the game.  We do not know what the rules of the game are; all we are allowed to do is to watch the playing.  Of course, if we watch long enough, we may eventually catch on to a few of the rules.  The rules of the game are what we mean by fundamental physics.” (Richard Feynman, 1918-1988)

Our goal: Find the "Rules of the Game"

My purpose here is to give you "a feeling" for the development of a scientific mind frame in the human species. Nothing more. Also, please do not read value judgement into my words. 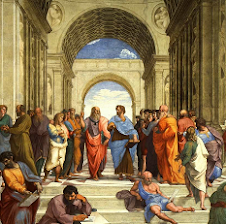 The School of Athens by Raphael
Physics with Perrone