An Account of Sir Isaac Newton's Philosophical Discoveries (1748), by Colin Maclaurin, who taught mathematics at the University of Edinburgh; you might begin with page 7 of Book I, Chapter I; find a discussion of Descartes in Book I, Chapter IV -- online book, pdf

An Enquiry Concerning Human Understanding
Philosophical Essays was reprinted with a new title, An Enquiry ..., in 1758.

Elements (c. 300 BC), by Euclid, a Greek mathematician (translated into English from Ancient Greek, notes on the translation) -- online text

Video (left) from a series by 3Blue1Brown

Video (below) from a series by Numberphile

The Evolution of Physics (1938), by Albert Einstein, who needs no description, and Leopold Infeld, a Polish physicist; an introduction to vectors (by Einstein!) --  online book (begins on p.12, but you should start at the beginning) 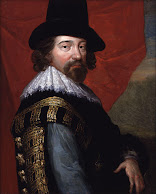 "Whereas a method rightly ordered leads by an unbroken route through the woods of experience to the open ground of axioms." (Novum Organum, Book I, Aphorism LXXXII)

"The formation of ideas and axioms by true induction is no doubt the proper remedy to be applied for the keeping off and clearing away of idols."  (Ibid., Book I, Aphorism XL)

Novum Organum (1620), by Sir Francis Bacon, an English philosopher and politician, often called the father of empiricism and the scientific method; translated (info) into English from Latin -- online text

"Human knowledge and human power meet in one..." (Ibid.)

Bacon intends the axioms of science (the "laws of nature") to be established by induction based upon observation of Nature.

Take note of Bacon's criticism of Aristotle in Book I, Aphorisms LIV and LXIII, of his Novum Organum, (in English: New Organon). The name of this book, by the way, is a reference to Aristotle's Organon. (Organon is the Ancient Greek word for a tool, although the word is now taken to mean an instrument of thought.) 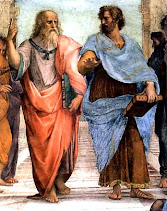 "Aristotelian philosophy had been based on the idea that one ought to be able to deduce sciences from generally accepted first principles, so that all science would be comparable to geometry." (The Invention of Science, by David Wootton, 2015, p. 83)

On the Nature of Things (c. 50 BC), by Lucretius, a Roman poet and philosopher; Lucretius sought to explain Epicurean philosophy to a Roman audience; Epicurus was a Greek philosopher (more specifically an atomic materialist) from around 300 BC; translated in English from Latin -- online text

This poem (or essay) is astonishing in its modernity. Epicurus (341-270 BC), following in the steps of Democritus, who died around 30 years prior to his birth, proposes the existence of atoms, the existence of a void (empty space), which was strongly denied by Aristotle, and the belief that gods are uninterested in human affairs and do not interfere in the world.

The poem, famous in antiquity, was largely lost to the world, then rediscovered in 1417.

Mathematical Principles of Natural Philosophy (1687), by Isaac Newton, of England; translated into English from Latin by Andrew Motte (1729) -- online book

-online archive of all of Newton's writings

The Harry Ransom Center at UT Austin has a rare first edition (1687) copy of Newton's famous Mathematical Principles..., often just called the Principia. They also possess a first English edition (1729). Both are available for viewing by the public. A few photos of these books are attached here.

The Republic (c. 380 BC), by Plato, a Greek philosopher; translated into English from Ancient Greek -- online text (find thoughts on knowledge at the end of Book VI ... search "province of geometry"; the famous Allegory of the Cave is in Book VII)

Evolution of Species
Image from the Houston Museum of Natural Science

It's ... natural to suppose we "know only what we see," even though we may actually be "seeing what we know."

Theories are not simply fabricated explanations for what we observe -- they're tools by which our perception of the world is constructed !

I like your design of adding something more particularly concerning the manner of philosophizing made use of in the Principia and wherein it differs from the method of others, viz. by deducing things mathematically from principles derived from phenomena by induction. These principles are the three laws of motion. And these laws in being deduced from phenomena by induction and backed with reason and the three general rules of philosophizing are distinguished from hypotheses and considered as axioms. Upon these are founded all the propositions in the first and second book. And these propositions are in the third book applied to the motions of the heavenly bodies. -- Newton, in an unsent letter to Roger Cotes, in 1713

quoted from an article by philosopher Stathis Psillos

What separates fact from belief -- pdf of article 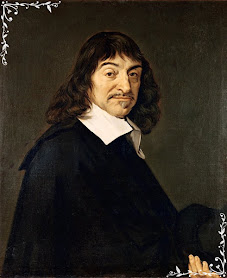 Discourse on the Method of Rightly Conducting One's Reason and of Seeking Truth in the Sciences (1637), by René Descartes, a French philosopher, mathematician and scientist; translated into English from French -- online text, (online book in French)

Paradigms: How Do We Know What We Know

Episode 1 - The Science of Seeing - video

Positive Feedbacks in Climate Change (2017), by Bruce Parker, visiting professor at the Center for Maritime Systems at the Stevens Institute of Technology -- online article 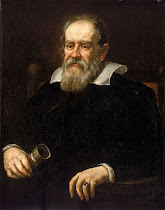 The Assayer (1623), by Galileo Galilei, an Italian mathematician and scientist; translated into English from Italian -- partial online text

The Dialogue Concerning the Two Chief World Systems (1632), by Galileo; translated into English from Italian; in which Galileo argues for the Copernican heliocentric model of the solar system -- online book

Video Series: The Mystery of the Laws [of Nature], hosted by Robert Lawrence Kuhn

This is but one video series in a larger collection, broadcast as a television program called Closer to Truth, which generally covers fundamental questions concerning physical reality and metaphysics. Videos are of interviews with leading experts in the various fields. 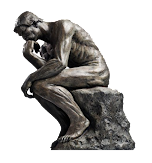 The Thinker
copy of statue by Auguste Rodin

String Theory and Post-Empiricism (2014), an interview of Richard Dawid by Richard Marshall; this interview presents challenging and controversial ideas concerning the assessment of the validity of scientific theories in the lack of empirical evidence -- online magazine article

Induction and Deduction in Physics (1919), by Albert Einstein; originally published in a German-language newspaper in Berlin; translated into English from German -- online text

Geometry and Experience (1921), by Albert Einstein; from a lecture before the Prussian Academy of Sciences; translated into English from German -- online text 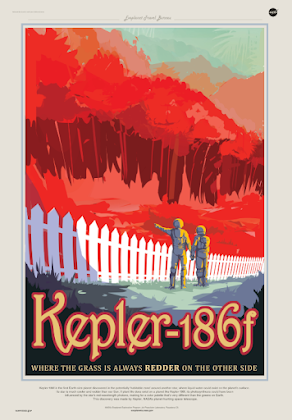 "What do artistic and scientific experience have in common? Where the world ceases to be the scene of personal hopes, wishes, wants, where we face it as free creatures, admiring, questioning, beholding, there we enter the realm of art and science. We do science when we reconstruct in the language of logic what we have seen and experienced; but when we communicate through forms whose connections are not accessible to the conscious mind, yet we intuitively recognize them as something meaningful —then we are doing art. Common to both is the loving devotion, the being above the personal, removed from our will." - Einstein

How Your Brain Tricks You Into Believing Fake News, by Katy Steinmetz, Time Magazine, August 20, 2018 -- pdf of article

"Individuals tend not to question  the credibility of information unless it violates their preconceptions or they are incentivized to do so." (source)
Physics with Perrone

The Garden is a collection of resources pertaining to the philosophy of science, along with a few historically-significant scientific texts.